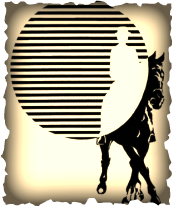 Someone says “Cheyenne, Wyoming” and what comes to mind… Frontier Days, Cowboys, cattle ranches, right? But, would you think “Dressage and Eventing?” Something so Equestrian English in such a Western environment.

Yep, that is us, as we celebrate our 30th anniversary of not just surviving, but thriving in this oh so cowboy and rodeo community. How can that be?

Let me start by saying that one of the original founders of the Club, Sue Gentle, does NOT throw ANYTHING away. Our club (CDEC) recently found this out, in detail. We asked if Sue would give us a talk at our March meeting about the club’s history. Were we in for a surprise! She arrived with programs dating back to 1965, club newsletters dating back to the beginning, and prize lists and newspaper articles for so many of these events. The boxes and notebooks of history kept us all entertained and amazed for the entire evening, along with some glasses of wine.

The success of this little English/Equestrian enthusiast club starts with the determined and welcoming personalities of some of the original members. The beginnings of this club started not as a club, but as divisions of competition in Laramie County Fair and Wyoming State Fair. Community and business support/sponsorships for all classes and types of horse competitions were huge. Many of the original club members started in other equine specialties, and gravitated to the less known English riding style; which, in the late 60’s and 70’s, was becoming more prominent in the USA overall. In the early days, before this club’s creation, horse enthusiasts entered into English Equitation classes, English Pleasure classes, Hunter and Jumper classes and several breed classes at the Fair. Any age, gender, horse or discipline was welcomed. And this, in large part, was sponsored by the local Arabian Horse Club, but many other associations took an active part in these shows.

The earliest events were held at the Frontier Park, which to this day still hosts the Annual Cheyenne Frontier Days Rodeo. The first dressage shows in the late 1970’s were held in conjunction with the Wyoming Arabian Horse Club Arabian Shows. Some early dressage riders may remember some of the initial Dressage Shows were held in a parking lot on the premises. Rock picking parties were held by members the night before in an attempt to improve the footing. The early dressage arenas were erected out of some interesting supplies; such as eleven foot tree log lengths supported by cinder blocks, PVC pipes which did not hold up in the Wyoming winds and frequently were blown over (or away) and the show would be halted while the pieces were retrieved and placed back to the arena. (See the picture).

By the early 1980’s, interest had progressed by a few people to focus on the pursuit of English riding, in spite of this dominant western environment. In 1983 “The Cheyenne Dressage and Hunt Club,” which was the original name of the organization was created. Later, it was changed to Cheyenne Dressage and Eventing Club to better reflect the current interest of the members.

The original members were a diverse group (and we still are). Most had no idea what Dressage was, let alone English tack or principles. Many of the meetings early on were held in a donated riding arena, and many times in a small indoor area at Frontier Park. The few members who knew anything about English riding shared their knowledge and helped others during these “mounted” meetings. The group ‘s first effort at a show was in 1983 when they joined with the Wyoming Arabian Horse Club in putting on a dressage show at Laramie County Community College. (See picture)

​This USDF/USEF Recognized show is now celebrating its 30th anniversary, still at LCCC, June 8 & 9, 2013. The venue is fantastic for our Wyoming weather and for the entire front range. The climate-controlled indoor competition arena is welcoming and always a cool place. There is an abundance of spectator seating and restrooms. The adjoining indoor horse stalls provide 4 indoor wash racks, and full service restrooms with showers. Onsite concessions are provided and vendors are present. The oversized warm up arena has good footing and roundpens are abundant for exercising horses that are staying. This show’s ongoing success is a direct outcome of the club’s generous members, and their positive and eager- to -volunteer attitude that is required for any show’s success.

CDEC, as a club, remains active with monthly meetings which include educational talks and always great snacks. Talks include CDEC members sharing their equine expertise and experiences in Dressage, Eventing, Steeplechase Racing, Endurance Riding and Combined Driving, among other activities. We also enjoy professional talks by local veterinarians and other professionals on such topics and horse health, toxic weeds and treatment, fire protection/mitigation, and. any other odd ball thing members come up with. Our members consist of people who show in Dressage and Eventing, in Ranch Horse competitions and compete in national Endurance Rides. Some enjoy nothing more than trail riding and some do not even own a horse. They just enjoy being an equine enthusiast, as we all are. As a club we are supportive of each other in our horse activities. We have contributed to charitable organization to help others less fortunate, especially with the past wildfires. We have an active trainer/student environment with both a Local Dressage trainer and a local Jumping trainer. We have a few members with indoor arenas (which is needed 6-7 months out of every year with our Wyoming weather and winds) and a few local cross country courses. So, we are able to sponsor annual Ride-ATest events, Schooling shows and other mounted social activities.

So, that is who we are, and Happy 30th Anniversary to our club and hope we have another 30 years of equestrian